I have a confession to make: I took up golf after I left my company job at the end of 2020. My husband still grimaces, but has quickly gotten used to me loading my bag into the car and heading to a golf course not too far away from our house. As a starting point, I showed up to the golf lesson with a set of clubs that I had purchased for 25 Francs in a charity shop in Zurich and a travel bag with wheels on it. My son quickly reminded me that bags with wheels are not cool. Nevertheless, someone had either given up the sport after some frustrating attempts or advanced so swiftly that the person treated themselves to a new set. In any case, the pro agreed that the set is good enough to allow me an attempt at the sport.

At first, it was a lot of hacking and smacking the ground, but over the course of a few lessons, the ball seemed to move a little farther and straighter than before. I still recall hitting the 100 yard sign on the range, accidentally, of course. Getting professional help when learning this sport was a good idea in the end. The required movements don’t come naturally, and you may never get to the point to actually enjoy it if you only dabble on your own. At least, this was the case for me.

This happened in June of this year. The goal was stated quite simply: by September I wanted to be proficient enough to play with my son in Canada. For him it has been a major pastime for quite some time and I felt that it would be a great idea to have a common hobby. It would also allow us to spend some time together on a scenic course while covering my fitness goal of 10,000 steps a day. As travel restrictions to Canada were lifted I was taking off in September to be finally reunited with my son after eighteen months.

Four rounds of golf later on scenic courses that remind one of parks with some wildlife, I can safely say the experiment was successfully completed. We finished the local course in Montreal without holding up anyone for too long. I did not cause myself too much embarrassment, nor did I injure the geese that enjoyed the last sunshine on an autumn evening and sat between my ball and the eighth hole.

For most professionals, golf and business have always been synonymous. Four hours of walking and conversation have served well as a first introduction to a new client or a private moment to discuss the newest and most important business – this was especially true in the corporate business environment I worked in for over thirty years. Some of us however have left that world only to discover that it can also serve as much more. Hence, the next time someone tells you they have taken up golf after having left their corporate jobs and entered a state of “semi-retirement”, think twice before you exercise your judgment. Things are never as straight forward as they appear. 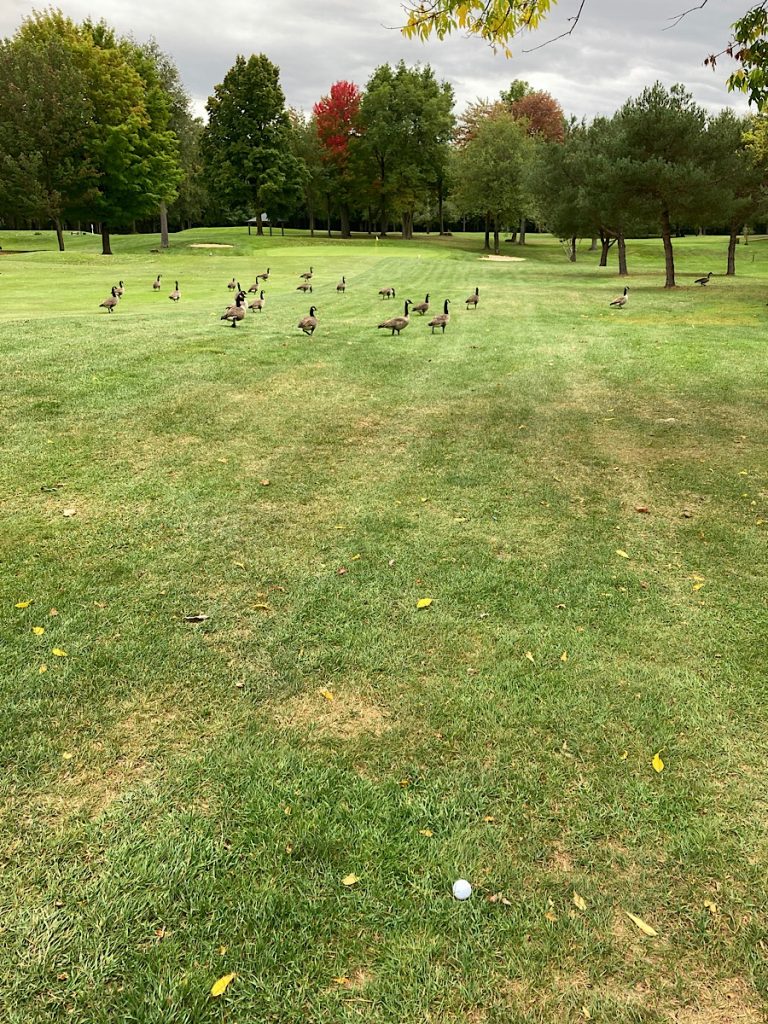 No animal was harmed in the process of approaching the eighth hole.